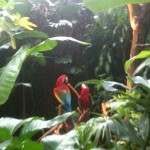 This morning was my 12th aerobics class at the senior center and three completely new things happened. There are about 25 of us ranging from age 55 to 75 and as usual we were marching and dancing and grapevineing to the disco beat, encouraged by our youthful instructor. The first new thing happened when one of the older ladies started having trouble breathing and she asked for the fans to be turned on. “Its too hot for me” she said. About fifteen minutes later, as we marched around the room in a circle, she put on her coat and left. It had never occurred to me before that these exercises might occasionally cause a heart attack among this age group and I worried about her. I’m sure I wasn’t the only one.
Then, a few minutes later, the second new thing happened. Another lady said she was too hot and opened the emergency exit door, to let more air into the room. I heard someone mutter– ” of course it’s hot, we’re exercising!”. Conflict was brewing.
Then the lady behind me said ‘close that damn door, there’s a draft’, and marched over and shut the door.
In this little kafuffle I flashed back to the long group retreats at Gampo Abbey. This exact pattern repeated itself over and again during many of our group practice sessions: Voice # 1. I’m feeling unwell. Voice #2. I need to open a door or window to get fresh air. Voice # 3. I don’t want that draft, so close the window.

I think of these three voices as the three stages of green, yellow and red light reactions:
1. having empathy for someone who is suffering opens the heart to concern. We feel vulnerable and wish we could help.
2. A layer starts to cover up that vulnerability, and our concern triggers fear about our own health, “now that I think of it, I’m too hot also”…. this fear can lead us to shift into a ‘me-first’ reaction.
3. Framing the situation as win/ lose, with no third option, aggression kicks in and we move into a heartless mind position. ” I don’t care about you, close that damn door ( or window). This is the red light.
So many small everyday conflicts like these can awaken us to our patterns. Having compassion for each other and at the same time being able to tolerate little discomforts is the key to dismantling the triggers that escalate small events like these into major conflicts.

teaches part time for Green Zone Institute and for Karuna Training. Susan is a retired Marital and Family therapist who has been practicing mindfulness meditation for over 35 years.  She is the author of the book The Five Keys To Mindful Communication and a contributor to The Mindful Revolution, edited by Barry Boyce. Her website is: http://www.susangillischapman.com. Read more about Susan here.